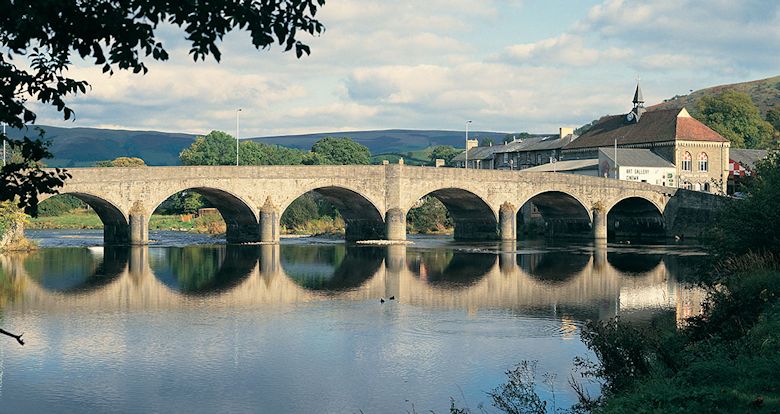 Builth Wells lies in the heart of Powys, between the Brecon beacons, Black Mountains and Tywi forest. The town has existed in one form or another since before the Roman occupation of the country, the Romans would have seen the importance of the town due to the position it holds over the river Wye making it a strategic position and, as an economic position due to its growing nature as a market and trading site.

The Romans are not the only civilisation to see merit in the town, the Normans constructed a church in the town dedicated to St Mary and then the castle was added by Edward the 1st, also known as Longshanks and "The Hammer" in reference to his attitudes and actions towards the Scots.

The town is now the site of the annual Royal Welsh Show, which is one of the biggest agricultural shows in the country and a beacon for many if not all the farmers in Wales, the location of the show here may not be totally random as the town has a connection to cattle which goes back millennia, the name "Builth" is derived from the Welsh "Bu-Allt" which if loosely translated means "cattle range" and the "White Bull of Builth" may be a direct reference to the white Park cattle that lived in the area as far back as before the Romans, and which still exist to this day.

Having existed for such time, it is fitting to think that Builth Wells now reaps the benefit of the "outdoors" life, which has seen such a surge in the local economies of so many rural Welsh villages and towns, thousands of city dwellers travel West into central and mid Wales to experience the mountains and the forests and the general feeling of vigour that comes with such visits to this beautiful country, and, being to centrally located Builth Wells has seen a surge in the last few years of these tourists wanting to explore nature, both the young who come to mountain bike and raft and the older generation that simply come for a good walk in the fresh air.

In summary Builth Wells has been part of the landscape since ancient times, and, with the way things are going, we see no reason that the town cannot continue to prosper and grow well into this century and beyond, afterall, modern technology may make life simple, but, in the end, we all like to feel the breath of nature on our skin.